The Importance of Thinking of Technology as Legos 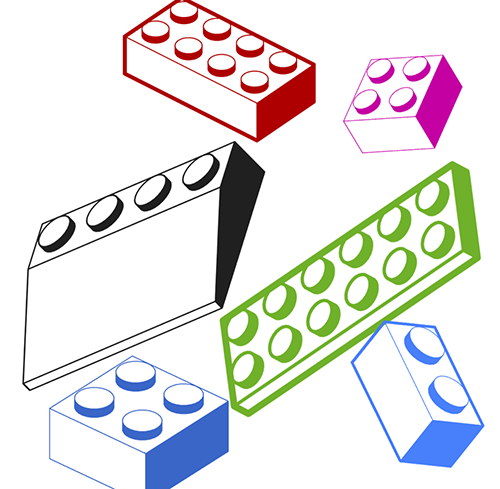 In my recent ShapingEDU LIVE workshop (view the recording) I discussed the importance of mixing and matching toolsets to facilitate pedagogical outcomes. As I was constructing the presentation I couldn’t help but think back to when I was a child. One of my favorite toys was my ever-increasing pile of Legos. In those days (and I’m going to show my age here) Legos were far more generic than they became in the 80s. While newer “sets” came in ever more customized forms, the majority of my tools were the basic 1X1, 2X2, 3X2, 4X2, 6X2, and 8X2 bricks. There were also the flat ones in similar size as well as various kinds of bases to build upon. The “radical” departure from these were the sloped roof tiles and the specialized wheels. As a child (and still as an adult), I used to delight in assembling my collection into as many different forms as I could. I never ran out of combinations. I still do this today as I think about how to assemble and reassemble the technological and pedagogical Legos that I use to try to communicate skills and knowledge to my students (or help others to do the same).

Over the last three decades we have been accumulating Legos in our boxes of educational tools. For many decades we had only the most basic of sets. The instructor’s tools were pen, pencil, paper, the blackboard, and various kinds of chalk. After World War II we added overhead projectors, portable film and slide projectors, and eventually, the Scantron and the Xerox Machine. None of these materially changed the possibilities of the teaching environment from those enjoyed by Socrates.

Computers started to intrude on the classroom in very experimental spaces starting in the 1960s and by the 1970s those who sought to connect education and technology such as Ted Nelson, Seymour Papert, and Alan Kay were already pushing the boundaries of what was possible with the technology of the time. However, decades later Kay was still bemoaning the lack of imagination being employed in their usage in the schools. Truth be told, the computing technology of the 80s, while an astronomical leap in ease-of-use over the 1970s, was not always for the faint of heart and if your primary concern was teaching, not computers, there was a lot of incentive to stay with the more mature technologies involving pen and paper, chalk (or marker) and slate (or laminated chipboard).

The result of this was a fairly widespread resistance to disrupting the teaching process with computing technology. There are many developed models of resistance to technological change and how we are far more likely to adapt technology to what we are doing (think about the transition from overhead projectors to PowerPoint) than to adapt what we are doing to new technological possibilities.

This conservatism extends all the way from the classroom level to the upper echelons of college administration. Even as teachers have resisted moving their classes online, many administrations haven’t really thought through the implications of truly digital campuses and the levels of flexibility that are opened up by disconnecting the business of instruction from the business of herding thousands of students through predetermined boxes (classrooms) that, in turn, dictate predetermined schedules, sections, credit hours, grades, transcripts, etc. These are all part-and-parcel of the systems of learning that we have constructed over the last 70-100 years. In fundamental ways these have not been, with rare exception, effectively overturned by the paradigmatic implications of the technological changes that have swept through the world since the 1990s.

Enter COVID-19 and institutions are suddenly faced with a world where all of those predetermined boxes have been swept away; students and professors alike are floating in seas of uncertainty; and the future and persistence of the “new normal” is unknown. Suddenly that box of technological Legos became the focus of a host of McGyvered activities as we struggled to overcome the “broken semester.” Some of us, even those like me who have been doing this for quite some time, discovered whole new opportunities in the technology as the system was forced to bend to survive. Others, I fear (the data is still out on outcomes) either through circumstance, requirement, or a failure of imagination, saw their pedagogical strategies shattered by the dislocation.

Now, as we plan the road forward the vestiges of the pre-digital educational systems are reasserting themselves. I fear that systems that are inflexibly designed will still break in the winds of a second or third wave of the disease. Educational journeys will be derailed or, in the cases of the most vulnerable, broken forever. How do we avoid these possible outcomes? We should look back at our box of Legos as I did as a child.

Building structures from basic pieces of tools and allowing our imaginations to roam freely hold the key to assembling, in the words of Nicholas Taleb, “antifragile” systems. Antifragile systems are organizational and bureaucratic structures that actually thrive on adversity. We fail to look critically at the blocks we have at our disposal because we don’t always see “technology” broadly enough or narrowly enough. When I say “broadly” I am referring to the fact that classrooms, furniture, and the buildings themselves can be thought of as technologies. Additionally, the human systems we use to organize ourselves, the aforementioned grades, sections, credit hours, etc., are also technologies because they formed the essential tools necessary to manage a 20th century college with thousands or tens of thousands of students.

But, like my Legos, combining them with toolsets we more commonly refer to as technology -- such as videoconferencing, learning management systems, collaborative work systems such as the Google suite, etc., etc. -- we can start to reimagine what a classroom is and, in turn, reimagine all of the things that flowed out of the assumption that it is limited to a physical space.

That is the purpose of the survey we have launched: to start to understand at least the toolsets related to teaching and learning. On top of these structures of learning we can then start to build nimble administrative systems that are adaptable to unexpected and rapid changes in circumstances, whether those are driven by unexpected pandemics, demographically-driven drops in enrollment, or automation.

We cannot begin these tasks until we understand our basic Lego bricks for what they are. At a fundamental level a classroom was never just a physical place, because that carries with it the assumption that students stop learning when they walk out of its doors. Nothing could be further from the truth. Students have always formed their own learning spaces and if you start to conceive of the Lego, or collection of Legos, that is the “classroom” as being fundamentally where the student is, then all sorts of interesting possibilities open up. If we build our Lego constructions around the minds of our students and then work our way up to the bureaucracy necessary to transmit knowledge and achievement at scale, it becomes far easier to discard those elements of the college experience that are most impacted by the dislocations of a pandemic world. We need to get out our Lego boxes and create novel constructions based on what’s possible, not what’s impossible. Improvisation is the only way through this. It’s high time we got started.