Innovation requires disruption. Learning requires the deconstruction of established pathways of thinking. Change requires anarchy. These situations imply a certain level of chaos. Yet we seem to have an innate bias toward order in our online spaces and communities.

Perhaps it’s because the wild-west nature of the internet makes most people strive for control over what they perceive as a constant struggle against chaos. The result is that many of our online interactions are over-controlled. We stunt meaningful human change by tacking too much towards order.

Learning and innovation come from the disruption of established routines., Santi Furnari describes places where these kinds of breaks can happen as “interstitial spaces,” which he defines as, “small-scale settings where individuals from different fields interact occasionally and informally around common activities to which they devote limited time (e.g., hobbyist clubs, hangouts, workshops, meet-ups).” (HT Glen McGhee)

Furnari’s interstitial spaces pull the participants out of familiar network interactions and create spaces for “collective experimentation,” such as those exemplified by the Homebrew Computer Club, that can spark changes in practice (aka, innovation and/or learning).

The content of the new practices is shaped via the collective interactions by which individuals engage with collective experimentation in interstitial spaces. Depending on how these individuals collectively interact and experiment, different types of new activities and ideas can emerge in the first place—that is, from different recombinations of those individuals’ different preexisting practices. In turn, these new activities and ideas provide the “raw materials” from which different types of new hybrid practices can eventually originate. (Furnari, p. 455)

Collective experimentation is particularly difficult to achieve in online spaces. Many, if not most, participants are engaging from within the context of their habitual environments. It is hard to achieve the true immersion necessary for the kind of shared meanings necessary for interstitial spaces.

At ShapingEDU, we have always attempted to create interstitial-type experiences. Our teams routinely create highly interactive online sessions that stand in marked contrast to many other remote events. In the “Four Stages of Zoom Enlightenment,” I used this work to and my experience as a participant in many other remote events to identify four categories of events. These ranged from traditional lecture/presentation (the lowest level) to digital constructivism, a series of live sessions connected by a persistent, tangible work project.

Truly interstitial online spaces, however, remain elusive. Once you leave an online space (if not before), “real life” quickly takes over. Motivation to repeat the experience is overwhelmed by other responsibilities and follow-on visits to the space do not occur. Furthermore, as sessions become more predictable (an especially difficult problem for classes that meet frequently), there is little sense of the unexpected or anticipation going into the next session.

Effective in-between spaces generate energies lacking in most of our day-to-day interactions with students and colleagues. This is because they create pockets of interactions insulated from the pressures of our daily networks.

“[I]interstitial spaces are defined both spatially and temporally. Spatially, they are small, in-between spaces - that is, small-scale settings where individuals from different fields meet. Temporally, they are short, in-between temporal spaces - short time intervals between the activities that individuals carry out, on a continuous basis, in their respective fields.” (Furnari, p. 445, emphasis in original)

We struggle to create these kinds of spaces online. Disconnecting people from the world around them (like my son does when he’s gaming) has long been a criticism of the online experience. However, this rarely extends to “professional” interactions. I know that many of my students, left unattended, would run my class as background noise and get on with their lives.

A common reaction is to over-structure the online event. Injecting order is a natural reaction to a perceived lack of control. One leader of the Homebrew Computer Club, Gordon French, tried this. It was not terribly successful:

Lee Felsenstein would later recall. “[Gordon French] would try to push the discussion to where he wanted it to go. He wanted it to be an educational event, holding lectures, teaching people about certain things, especially stuff he was expert on. He was very upset if the discussion strayed from people literally teaching other people in a schoolish sense. He would jump into whatever people were saying and get involved in the content, injecting his opinions and telling them ‘There’s an important point that shouldn’t be missed, and I know more about this kind of stuff.’” After the first part of the meeting, in which people would introduce themselves and say what they were working on, Gordon would stand up in front of the room and give what amounted to a tutorial, explaining the way the machine uses the code you feed into it, and informing the restless members how learning good coding habits will save you headaches in the future... and sooner or later people would get so impatient they’d slip out of the meetings and start exchanging information in the hall. (Steven Levy, Hackers, p. 179, O'Reilly Media. Kindle Edition.)

There is a spectrum between order and chaos. From the facilitator standpoint, tending toward order is easier to execute because you can control all the variables. This is also why it is so easy to gravitate toward a lecture-based approach to teaching. It also represents the lowest level of community engagement.

If we isolate and dehumanize our audiences, our efforts are unlikely to stimulate creative growth in distributed communities of practice. In the artificial environments that we create online, and all-too-often in-person as well, it is easy to overlook the humanity of our participants.

Feeling our way toward the right balance is difficult, however. Open-ended discussions suffer from a lack of time boundaries. There is no pressure to bring the conversation to a close and so resolutions are rare. Mission creep is common. Bounded events risk stifling ideas because of a lack of time.

Perhaps the problem is that we are trying to over-control even this aspect of our interactions with one another. Furnaripoints out that connections between events are essential for establishing shared practices.

“[T]o constitute new practices, the new activities emerging in interstitial spaces need to be repeated over time, allowing new ideas to ‘stick’ - to be shared among the people interacting in those spaces, thereby being conducive to the formation of shared meanings around these new activities and ideas.” (p. 450)

Repetition is more important than structure. It is repeated practices that form the catalyst for turning interactions into collective experimentation. Without them, even the most fruitful sessions are going to be largely wasted. Alternating periods of chaotic energy and thoughtful reflection should become repeated practice.

One strategy for creating interstitial moments might be to establish periodic meetings where people bring their pedagogical innovations to the table and try to apply their techniques to the rest of the group. Another might be an open-ended book/article club where participants can suggest their own reading for group discussion and reflection (stay tuned on that one). I took part in such a group with four friends/colleagues several years ago. It resulted in many fruitful conversations and a lot of creative growth on my part.

Learners of all types benefit from a little chaos in their lives. It’s scary, but if applied in a safe space, discomfort can be a catalyst for exploration. We may not invent the next personal computer, but perhaps we can cut through some of the rigid order that characterizes so many interactions, especially online, these days. 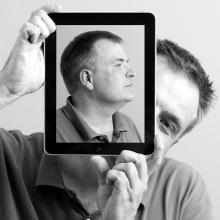 Tom Haymes (@ideaspacesnet) is ShapingEDU Innovator in Residence and author of Discovering Digital Humanity and Learn at Your Own Risk,