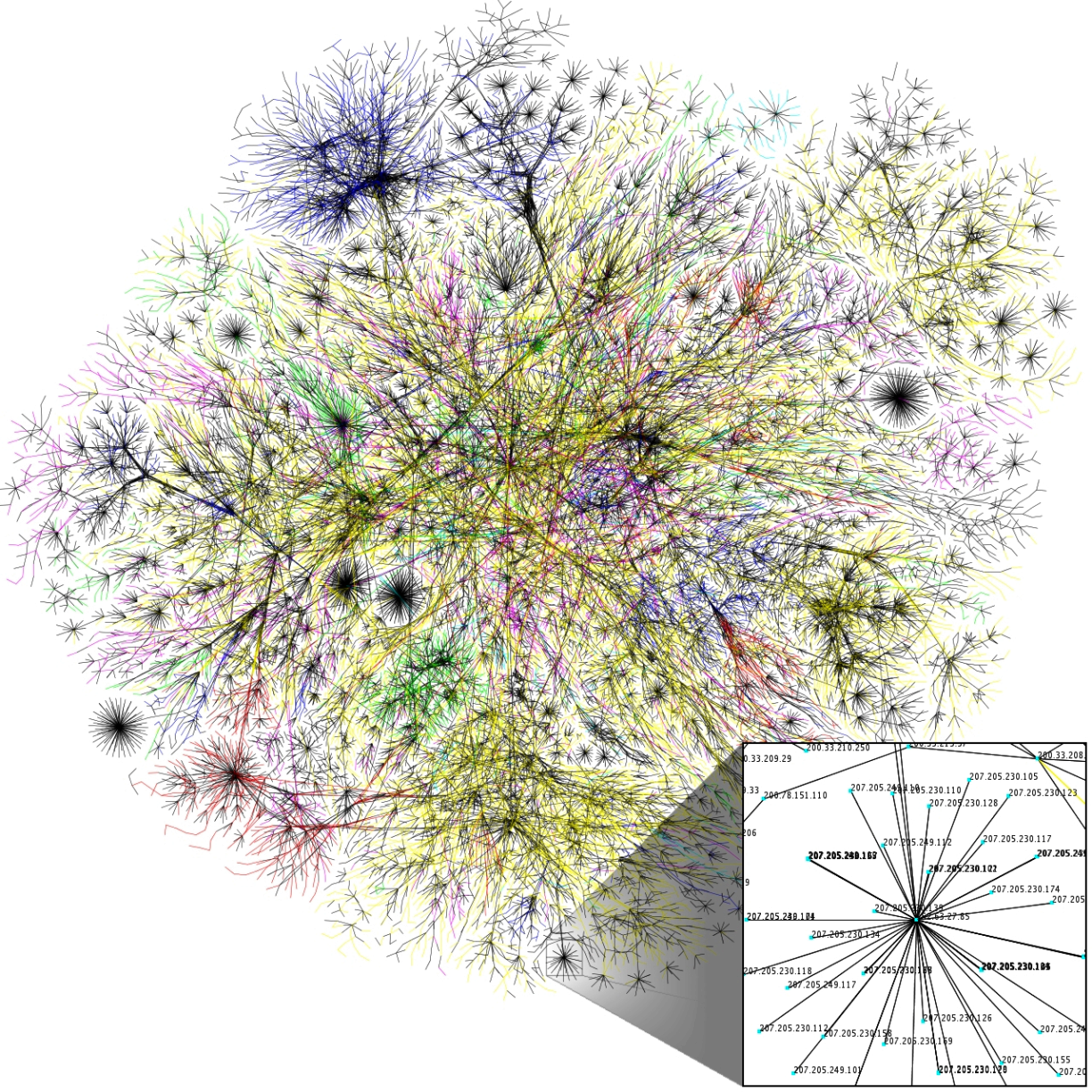 In 2020, we have seen a pandemic of cascading network failures throughout education. Systemically, Covid has attacked our networked brains as decisively as it has attacked our physical ones. Teachers struggling to reach students who are disconnected on many levels is not a new phenomenon. However, exposing that struggle to the hurdles of “remote learning” has served to accentuate the real barriers to learning: equitable access to the neural network of learning conversations that are central to every educational project.

We clearly need much more antifragile conversational networks in education. What we have here is clearly a failure to communicate. That’s not a new kind of challenge. In 1962, Paul Baran proposed a communications network characterized by “redundancy of connectivity.” He wrote:

We shall consider in some detail the synthesis of a system where the form of the disturbance or “noise” is the simultaneous destruction of many geographically separated installations. The system in particular is to be a very high-speed digital data transmission network composed of unreliable links, but which exhibits many arbitrarily desired levels of system reliability or survivability.

Six years later, Baran’s work formed a part of the conceptualization of the ARPAnet and led to the widespread controversy over whether the reason the network was designed as a distributed packet-switching network was to resist nuclear attacks. Whatever the underlying rationale, the idea of a distributed network created precisely the kind of opportunities to link together ideas envisioned by Bob Taylor at ARPA as he was assembling the project:

Three things at IPTO [The Information Processing Techniques Office] struck Taylor. First, every one of the universities and research centers that had a contract with ARPA wanted the latest computers with the most capabilities…. Second, on his travels to talk to young researchers, Taylor discovered that those in one place were intensely interested in learning about the research happening at other places. He realized that it would make sense to connect them electronically so they could share more easily. Third, Taylor was struck by the fact that there were three terminals in his Pentagon office, each with its own passwords and commands, connected to different computer centers ARPA was funding…. His need for three terminals, he said, “led to an epiphany.” All three of these problems could be solved by building a data network to connect research centers, that is, if he could implement Licklider’s dream of an Intergalactic Computer Network.
--Isaacson, Walter. The Innovators: How a Group of Hackers, Geniuses, and Geeks Created the Digital Revolution. Simon & Schuster. Kindle Edition.

Thus, the idea of a distributed network became fused with the idea of a “data network to connect research centers” and the idea of “robust connectivity” became irrevocably tied with connecting ideas. Thinking about networks as a data problem was not an entirely new idea and can be dated to the roots of Claude Shannon’s work on signal-to-noise issues in the 1930s and 40s (but that’s a longer story which you can start exploring here).

In education, we are fundamentally dealing with the problem of signal-to-noise as we attempt to communicate with our students. There are many levels where this occurs even in a traditional classroom setting. I cannot tell you how many times I’ve heard colleagues complain about students not getting a concept or even listening to simple directions that are repeatedly explained to them in class. There is the famous bon mot that “lecture represents the transmission of the professor’s notes to the student’s notes without passing through the brains of either.” I have spent decades trying to overcome signal-to-noise problems at all levels in my classes.

The Covid Pandemic has had a Black Swan-like impact on the signal-to-noise ratio of how we communicate with our students. Coupled with what I refer to as Haymes’s Law, which states “To make something digital is to make transparent all of its flaws,” the crisis revealed many cracks in our educational communications networks. Everyday signal-to-noise issues that we took for granted and managed in a myriad of different ways in-person became glaringly obvious when migrated to videoconferencing solutions and Learning Management Systems. The ability of the network of education to distribute itself was suddenly compromised by the inability of its operators (the teachers) to effectively use these tools to reach their students. As I point out in my forthcoming book Learn at Your Own Risk, it’s a lot to expect of teachers to perform in a different media than the classroom stage to which they’ve become accustomed. The results of “remote learning” over the last six months have ranged from the comic to the tragic. In either case, communication of essential information was compromised as effectively as a nuclear attack on the system nodes.

But this was not the only problem that emerged in the robustness of our networks. Many of us quickly discovered that, to quote William Gibson, “the future is not evenly distributed.” Added to the usual attention-deficit issue that many teachers confront in their classrooms was the fact that all nodes of our learning networks were clearly not equal. The barriers to entry were suddenly magnified when schools and colleges, particularly those with a mission to equitably serve underserved communities, discovered that students were suffering from significant technology and connectivity issues in being able to even access the learning conversations. Effective communication depends on both the sender and receiver being operable. When students can’t connect effectively to the conversation, it might as well not even be happening.

This year two of the ShapingEDU Innovators in Residence projects are focused on precisely these two aspects of this system. The response to Black Swan events should be to design what Nicholas Taleb (the originator of the concept) refers to as “antifragile” systems that thrive when confronted by unexpected shocks. Ruben Puentedura’s project is all about gaming out what those responses might look like across a broad range of activities that educational institutions are seeking to preserve during times of crisis.

However, without the kind of distributed and redundant network that Baran’s piece described way back in 1962, those responses become exponentially harder. Covid has made it clear that a central equity issue in American education is uneven access to the learning conversations going on. If we can’t give our students a “redundancy of connectivity” then the project of education will fail. ShapingEDU’s Universal Broadband Project therefore forms an indispensable foundation for developing antifragile systems of learning. It’s not a network if only the protected nodes are sending.

I have put considerable thought into my own course’s response to pandemic disruption. I teach Government to a community college audience and so from the very beginning I assumed a level of connectivity issues and structured my assignments and interactions accordingly. For instance, I assumed that many of my students would lack robust or reliable broadband access and so I immediately rejected all videoconferencing systems that required either high performance machines or significant connectivity to operate. I wanted students to be able to be an active participant in class even if the only reliable access they had to live sessions was using a voice telephone line. This necessarily limited their ability to see screen shares and other events but I also recorded the sessions for later review. I also gave serious consideration to the live performance aspects of class, looked for opportunities to convey information asynchronously that was more effective than live presentations, and was always sensitive that my students might have to seek out opportunities to connect at times outside of “normal” class time.

I was able, with considerable effort, to make my class relatively antifragile. However, there are still compromises in the conversation that cannot be overcome without a more distributed technical and connectivity infrastructure, which is why the work of the Universal Broadband Project is so essential. Moreover, I am a seasoned technology veteran with two decades of active exploration of the interactions between teaching, learning, and technology and almost 40 years of experience trying to bend computing technology to my will. The same is definitely not the case with the vast majority of the instructional community out there. There is clearly a need for some frank discussions about the present and future of that very human part of the network as well.

If the intersection of the two Innovation projects teaches us anything, it’s that making systems of learning antifragile is not a technology project, it is fundamentally a human project. We are not proposing high-tech here. We are proposing basic tech here. But that has to be coupled with the larger ShapingEDU mission of Humanizing Education to create truly “redundant connectivity” to enable humans to connect into conversations of learning (and this includes media literacy). The pandemic has served to remind us that that the network is people. It’s time to make it antifragile.