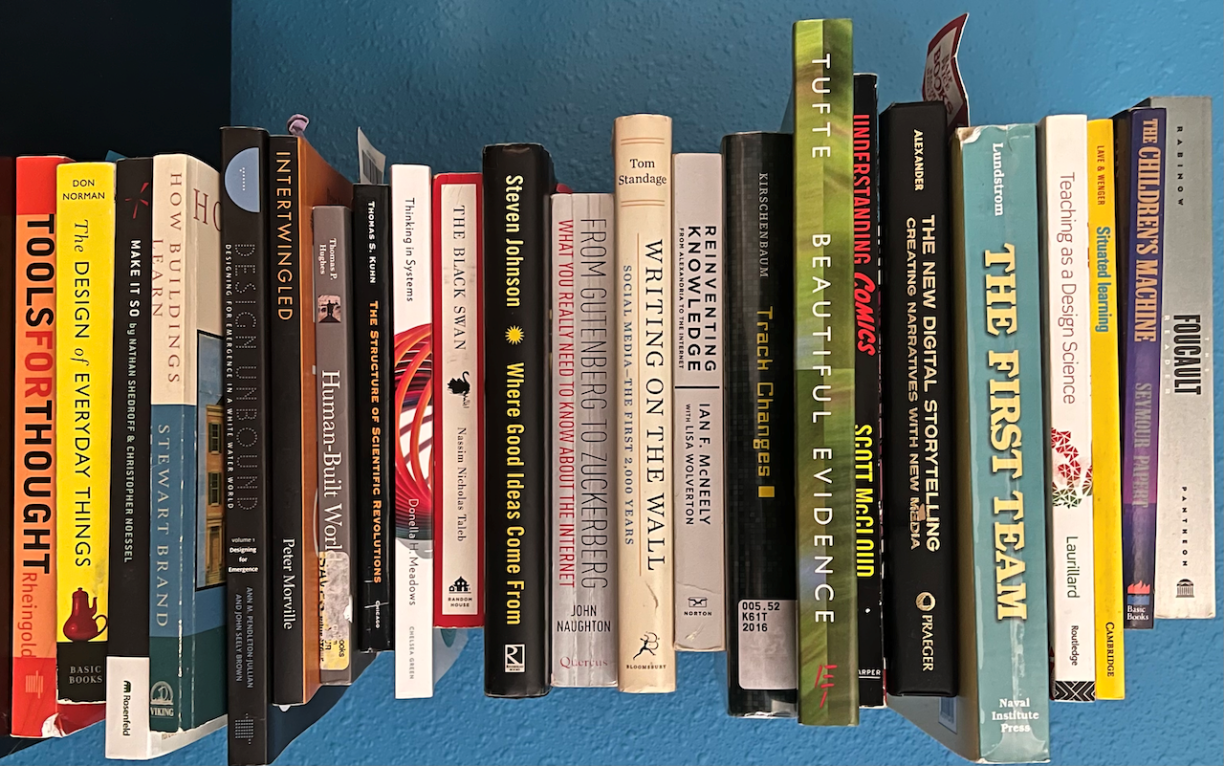 There are certain books that constantly influence how I design systems for those I teach, advise, and facilitate. As I looked at the universe of books on that make up this list, patterns emerged. The list itself told a story. It was not an unexpected story, but I must admit that it surprised me at how suddenly it came into logical focus. These books orbit around the pole of postmodernist constructivism.

I discussed how constructivism has influenced my thinking in another blog, but it bears mentioning here that I think all technologists need to approach technological change with a constructivist mentality. As technologists, we build new worlds. Postmodernism deconstructs many of the paradigms of the old industrial world that we take for granted. Stripping bare the assumptions of our industrial culture is essential if we want to design authentically digital systems.

When I was studying postmodernist theory in graduate school, it was often attacked as rejecting the rationalism upon which humans built the modern world. Like many absolutist critiques, this is only partially true. Constructivist postmodernism accepts the processes of rationalism. However, it explores the possibility that our supposedly neutral analysis of the natural or social worlds is not really neutral after all. It challenges us to examine the social and historical factors in these biases instead of accepting human-constructed systems as they are present to us.

We should question the logic of every system. The overwhelming majority of systems we take for granted today, from government to business to education, were constructed using rationalist models. These systems now find themselves challenged by the fluid and fast-moving nature of technological change. The first signs of this come as “traditional” media being overwhelmed by “social” media, but other systems are increasingly coming under scrutiny.

What is missing from this all-too-familiar conversation is the idea that we can intervene in these changes to push humans to the fore. If we refuse to criticize inhuman legacy systems, we will continue our servitude to the machines. But we also have a responsibility to go beyond criticism and build new and better alternatives that bring people together instead of driving them apart.

As we build technology systems, we inevitably bump up against systems that reject critical questioning (see the “Understanding Systems” books on the list and my own Discovering Digital Humanity). Perceiving these systemic realities is essential for designing technologies that will not be rejected as being too threatening, but still reform practice to be more inclusive, diverse, and human. Applying constructivist thinking is an essential tool in achieving these goals.

As I neared the end of this project, I recognized that a Venn Diagram would provide a useful tool for visualizing how these topic areas overlapped and that the one area where they all overlapped is in the constructivist literature. The book that emerged at the center of it all was The Foucault Reader. While this is not the only constructivist text out there, it is one of the more approachable ones and summarizes many of the key tenets of the philosophy.

Constructivist thinking can seem deeply threatening because it seeks to question everything. As humans, we instinctively grasp at patterns of familiarity. They give us the illusion of control over our environments.

We construct systems for efficiency but also to protect ourselves from the unexpected. As a result, we often construct these systems reactively. They always incorporate human fears and cultural biases.

We find ourselves in a period of immense technological flux. This reality gives technologists immense power because we are the people constructing new systems from scratch. The job of the technologist is to support digital humanity through mindful design. Building systems of technology requires that we design them to augment the human experience. I chose the books on the list because they give the reader a primer on how to design technology, navigate systems, and construct networks of humans. 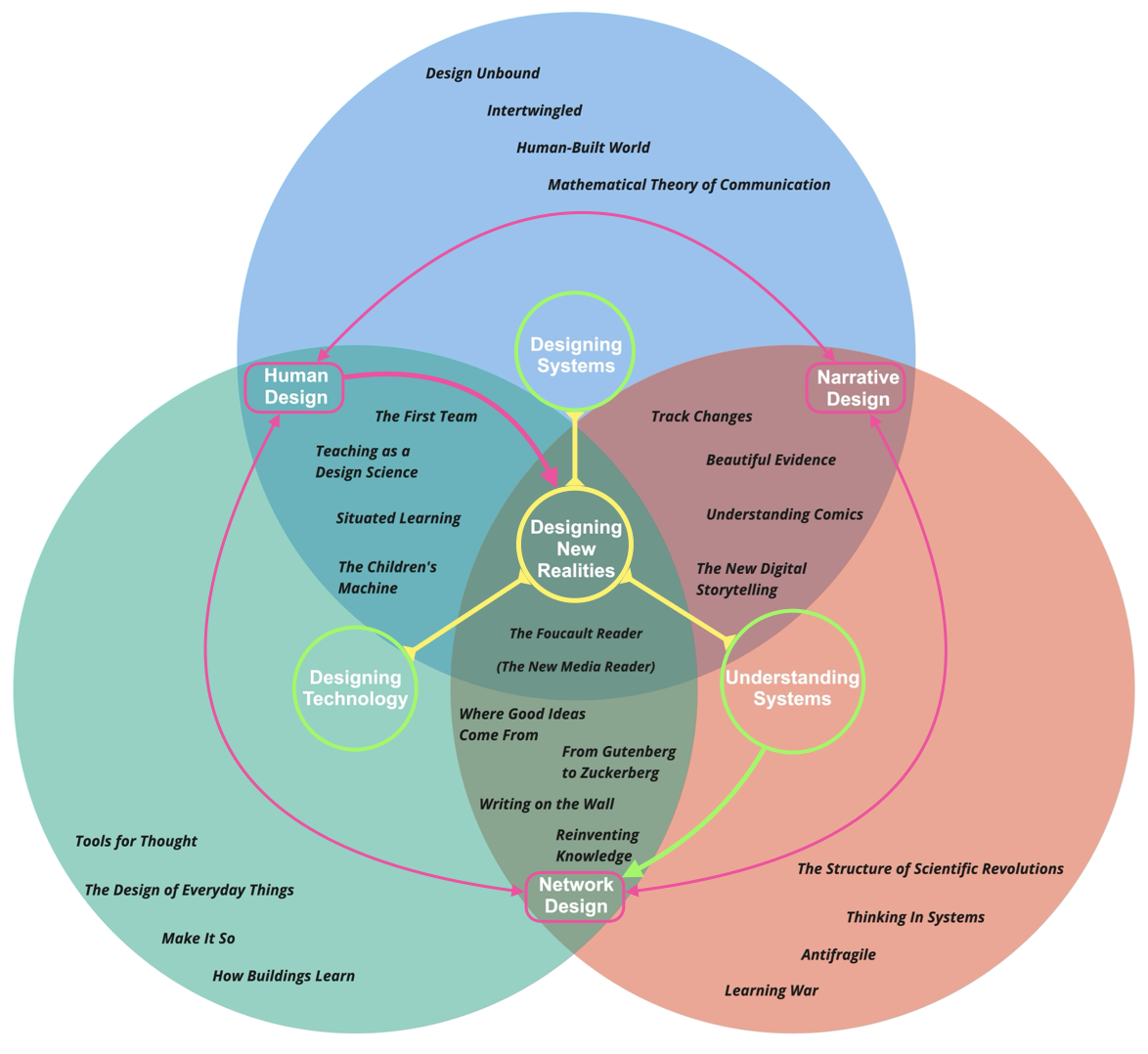 I organized the seven areas on the book list in such a way as to take the technologist on a journey from the concrete to the abstract. In the inner orbit, we start with technology design, progress to systems design, and then look at how systems push back against change (and strategies for working through that resistance).

The outer orbit contains books that teach us where we can use technology to create environments for human augmentation. First, we look at how we construct networks of knowledge. Second, we look at different venues of storytelling that the digital world opens up for us (word processing, visual tools, and gaming). Finally, we look at how we can design and adapt systems to achieve specific human tasks, from operating carrier battle groups to teaching and learning.

The last section returns to the center to look at the wellspring of constructivist thinking. If you progress through these areas of human-centered technology design, you can see Foucault with fresh eyes. In the coming months, I am considering reversing this journey using articles instead of entire books to show how you can use the end as the beginning as easily as you can use it as the end.

All the sections revolve in an orbit of powerful attraction around this basic idea that we construct how we see - either physically, virtually, or in our imaginations. If we understand this, we can see pathways to navigate to a mindfully designed future where the human, not technology or organizational/cultural constructions, stands firmly in the center. The alternative is that we can all become slaves in various forms of technological and systemic dystopias.

Given a choice, I always choose the humanist approach, but it often takes a lot of reflection to find that. The collective lesson in these books is that, as constructors, we can build systems that revolve around ourselves and are profoundly human. Collectively, they point us down the pathway to discovering digital humanity.

Tom Haymes is Innovator in Residence and Innovation Strategist for the ShapingEDU Project. He is the author of two books, teaches, and consults on technology and space design.