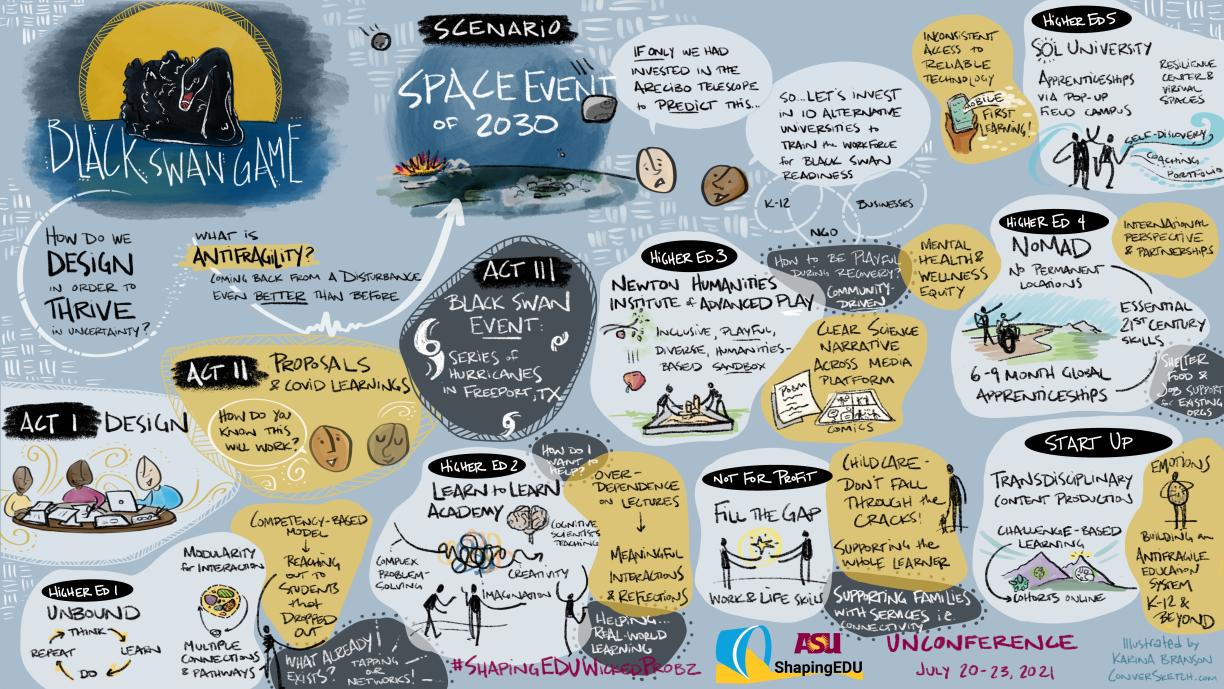 Serious fun for all at the Unconference's Black Swan Game

During ShapingEDU’s 2021 virtual Unconference, participants joined Innovator in Residence Dr. Ruben Puentedura for a day of enjoyable challenges at the Black Swan Game.

What is a Black Swan event?

Black Swans are highly impactful events that cannot be predicted ahead of time, but, in hindsight, the elements that contributed to the event were well understood. That is to say, the following criteria can be used to determine if a Black Swan event has occurred: fundamentally unpredictable, highly impactful and explainable retrospectively.

Puentedura designed and hosted a three-part, Black Swan simulation focused on learning in the face of disruption and gaining antifragile thinking skills.

The premise of the game: It’s 2030 and an unexpected asteroid struck Earth, fragmenting prior to impact. No major population centers were hit, but the result was devastating: trillions of dollars in costs due to casualties, infrastructure and property damages with associated disruptions to trade and all forms of business. After discovering that keeping the Arecibo Observatory from collapsing would have allowed for early detection of the asteroid, it was decided to fund the creation of a community, named Arecibo after the neglected radio telescope, dedicated to crafting antifragile objects and policies. What will you create?

“The three stages scaffold a learning process,” explained Puentedura. “In the first stage, game players think about what it would take to design an institution that can assist other groups with achieving antifragility, and is itself antifragile. In the second stage, they test their institutional design against a known Black Swan event of the past, coming up with designs that retrospectively could have been of use. And in the third stage, they test both their institutional resources and institutional structure, when constructing a response to a new Black Swan scenario. At each stage, failure is very much a real possibility -- but the lessons learned guide and strengthen changes that can improve outcomes in the next stage.”

Participants were invited to share their experiences after each round -- including their challenges and triumphs. In the end, all players were winners, having developed a greater understanding of antifragile thinking that they can use in their everyday lives. “I was very pleased with the work and insight of participants, which grappled with the meat of the dilemmas presented, while avoiding traps,” said Puentedura. “Unfortunately, mega-institutions are also mega-vulnerable to Black Swan events, which typically spells doom for these players in phase three. By contrast, all teams at the ShapingEDU Unconference wisely chose compact or distributed designs, which survived the events of phase three quite nicely.”

Puentedura shared that the Black Swan Game was designed for any Unconference participant to join -- he did not assume more than a moderate degree of familiarity with Black Swan Thinking. But what if you want to explore Black Swan thinking further? “I would recommend looking through the resources on System Dynamics, Agents, and Networks created by the Black Swan Project at ShapingEDU, trying out some of the tools discussed, and getting their hands dirty with them in the context of a problem that interests them,” said Puentedura.

View the Unconference playlist on ShapingEDU’s YouTube channel to view all phases of the Black Swan Game: