At yesterday's Connecting for Work and Learning project team call, we kicked off a new activity to further universal broadband by analyzing the American Jobs Plan. Over the next few weeks, ShapingEDU community members will identify and prioritize intersections between universal broadband & other economic goals listed in the American Jobs Plan. The resulting list of top intersections and opportunities will be an actionable resource for education, government, business and policy changemakers. 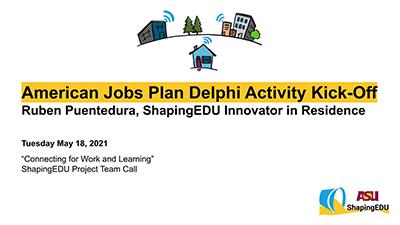 At yesterday's kick-off, Innovator in Residence Ruben Puentedura shared some analysis of the American Jobs Plan and walked through the Delphi activity which we'll complete together over the next three weeks.

How to get involved

The American Jobs Plan includes the provision of Universal Broadband as one of its goals. At the same time, it outlines many other economic goals, some (perhaps all) of which would benefit from consideration in the context of Universal Broadband. For instance, “Rebuild Clean Drinking Water Infrastructure” becomes even more interesting if “smart monitoring” of both quality and consumption becomes available to urban populations through their broadband connections (see an example here).

In this phase of the Delphi process, ShapingEDU community members are asked to contribute as many examples of this type of intersection as come to your mind, and that strike you as important.