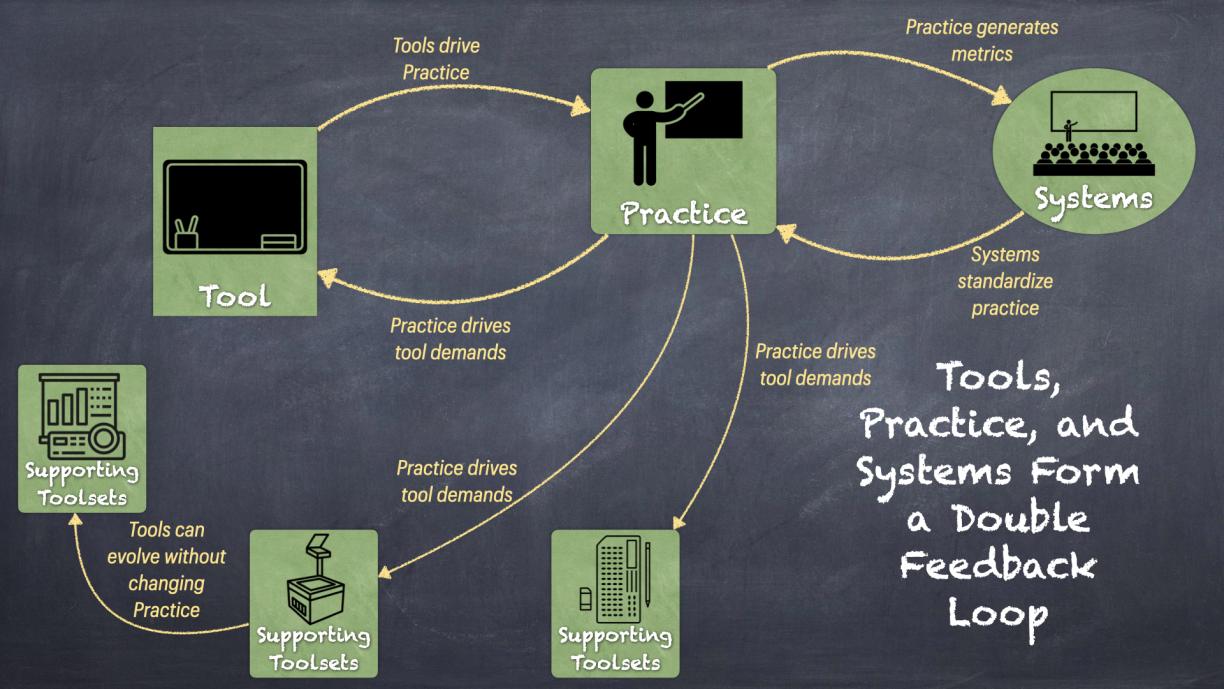 All too often we let our systems dictate the tools that we have to facilitate learning in our students. If our goal is individualized, learner-centric instruction, then tools driven by systemic logic will often fail to meet the needs of the learners we are trying to serve. Those tools all too often tend to be driven by the logic of the systems that created them. Tools and systems become self-reinforcing loops and the result is practice that is driven by tools and systems instead of its effectiveness in reaching the learner. Our systems and tools came under immense strain last year under the pressures of Remote Teaching. It provided a unique opportunity to assess how these two factors impact how we teach and perhaps to imagine how flawed systems and tools can be reimagined to design better learning futures for our students.

The blackboard, which emerged in the 19th Century, both drove and evolved in parallel with modern forms of classroom lecture. Industrial Age pedagogy was characterized by the scaling of the distribution of knowledge, with efficiency of exchange being it’s primary systemic goal. Before the blackboard the teacher usually interacted on a much more individualized level with the student. The blackboard enabled the scaling of classrooms to a size that increasingly depersonalized instruction and made possible the growth of higher education itself into what we would recognize as its modern form.

Eventually, the blackboard facilitated the creation of an economic logic biased toward ever larger classes and a pedagogical bias toward expository content delivery, aka, the lecture. Norms begat culture and we now have several generations of professors (and their students) who have been inculcated in this cultural practice. Supporting tools have sprung up around this paradigm such as mass, high stakes testing and a textbook industry based on access to a captive audience, creating an ecosystem of tools that serve the system more than they serve the learner.

The impact of the blackboard, however, was far from bad. It represented a technological leap over speech alone. Initially, it was a technology developed by faculty that allowed teachers of the new sciences established by The Enlightenment to more effectively work and communicate with their students. As such, it was a powerful tool that also enabled high-level communication and problem-solving by the instructor and any students the professor chose to allow access to the board. It made the best use of the technology available to teaching in the 19th and for much of the 20th century.

In short, the blackboard was perfectly sufficient for teaching those whose destiny was to reach the higher levels of society through their university education. This, of course, included all of the professors who subsequently used the tool to continue the chain by passing down knowledge and pedagogical strategies to the next generations of teachers in their classrooms. Norms emerged in this system to create powerful self-reinforcing loops that this is what education looked like and what it should always look like. You either had to adapt to the norms or be left behind. If you wanted to be part of the club, you adapted to the norms.

Following World War II, however, the demands on higher education started to shift as the economy demanded that more and more of the workforce receive a college education. Teaching learners to be the equivalent of a college professor in this environment no longer made sense to the vast majority of the new students. As Diana Laurillard pointed out in her 2012 book, Teaching as a Design Science:

Until quite recently,it was the prevailing view, especially in universities, that teaching is about imparting knowledge. Sadly, “imparting knowledge” has usually been only a partially successful teaching activity, as every essay and examination paper testifies. While higher education was an elitist enterprise, and exams were designed to select the best minds, it was possible to make this failure the responsibility of the student. This has changed. Higher education has become less elitist, and has taken on the task of educating a much larger proportion of the population to degree level…. - Laurillard, Diana. Teaching as a Design Science (p. 11). Taylor and Francis. Kindle Edition.

However, despite this paradigmatic shift in the ends of education and those who should receive its benefits, the tools that facilitated it only evolved incrementally. Blackboard and lecture instruction were augmented by overhead transparencies and automated assessment methods such as multiple choice testing. Students still had to master the intricacies of decoding a professor’s scribbled notes on an evermore distant board as the classroom grew larger and larger. Furthermore, they became widgets in a system driven by limitations of 19th-Century technological paradigms (the punch card - which eventually begat the Scantron - was invented for the 1890 census and the first commercial overhead projectors were demonstrated in 1866).

With the introduction of digital projectors around the turn of the 21st-century, the possibility of more interactive instruction became possible. However, the vast majority of professors merely used this new technology to amalgamate the overhead projector and the blackboard into one tool. The practical advantages of a slide deck projected to the class lay in overcoming the handwriting of a professor and providing a media container for their transparencies. It made existing practice easier. However, this shift in tools was easily accommodated into the existing paradigm. There was no real pressure at most institutions to change that. 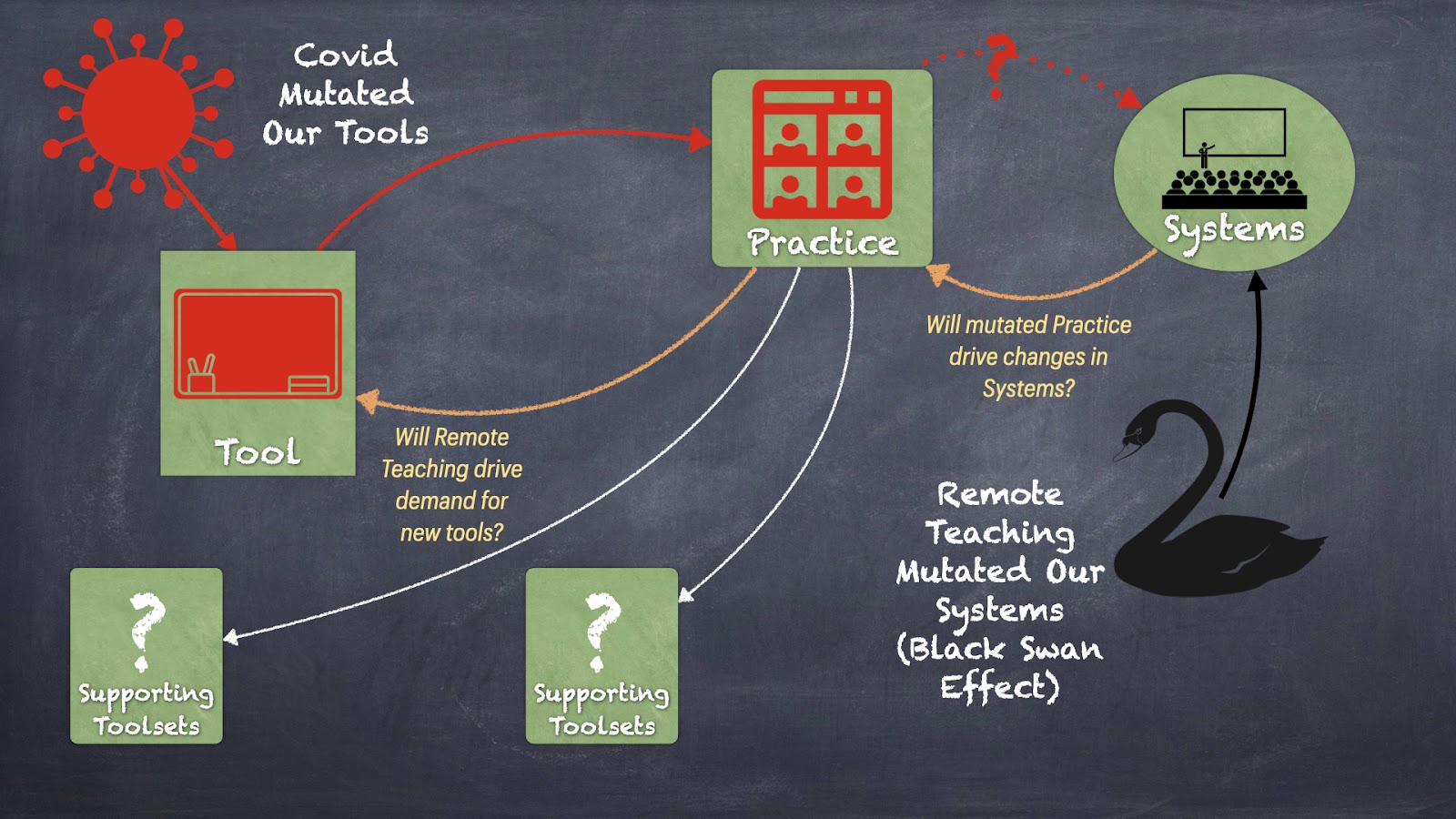 Covid broke many Tools. New Practice had to be developed. Systems had to adapt.
How deep is the viral disruption going to be long term on shaping Practice and the Tools it demands?

The pandemic broke those tools and forced professors to try to replicate what they had been doing in a physical classroom using some sort of video conferencing solution and whatever other tools they could quickly master. Suddenly, the logic of the space changed. Both individuals and institutions struggled with the implications of what this new space taught us.

While the pandemic itself was not a Black Swan event, Remote Teaching was. Those that recognized the systemic nature of what was happening to their instruction used this as an opportunity to take a sober look at what was working in their pedagogy and what wasn’t. Those that didn’t and tried to stick to the lecture-driven approach that was familiar to them quickly discovered that students checked out far more obviously online and that many of the strategies that professors had developed to break down the dehumanizing effects of a lecture-based classroom didn’t work in these unfamiliar learning environments.

Under the pressures of Remote Teaching we quickly discovered that the systemic environments created through our relationships with the blackboard and its derivatives blinded us to a huge range of tools as well as pedagogical strategies. A comprehensive rethinking of how we adapt the systems of education designed to educate the elite to the needs of much broader audiences with vastly different priorities was long overdue. We have also rarely considered how tools and systems drive each other. I know from my own experience that purchasing decisions were rarely driven by any comprehensive analysis of the pedagogical implications of a given tool, and that’s if the instructional side was even consulted at all.

The foolishness of this approach was exposed when infected by the implications of an invisible virus. Badly designed tools cracked under the strain. Systems were forced to expedient adaptations. Poor decisions, past and present, were amplified. Students and faculty were often left adrift with little idea of how to respond to these events. Many students took one look at this reality and checked out of school entirely. We learn from failure. It’s time to begin that journey back. Tomorrow, I will describe how ShapingEDU is responding to this challenge through a pair of innovation projects that will take place over the coming months.

Part II - Breaking the Closed Loop at Both Ends