Do we shape technology or does technology shape us? At its root this question has driven much of my work over the last 30+ years. I will freely admit that I am a control freak when it comes to technology. I’m not willing to accept any technology that gets in the way of what I’m trying to do and I’m always looking for ways in which technology gives me new opportunities to explore doing new things. I have never been willing to accept technology as a set of shackles.

When people come to me asking about photographic equipment, for instance, my main piece of advice is not whether to buy Canon or Nikon but to ask themselves how they can make the camera invisible. Photography is not about equipment. It is about how to freeze what your mind and eye perceive. The camera, printing process, etc. are just mediating steps.

I make the same argument about teaching and that is core to the arguments in my book, Learn at Your Own Risk. Teaching is about the relationship between the student and the world around him or her. Technology is just a mediator of communication and thought in teaching in the same way that it is a mediator of light and thought in photography. You can break down any technologically mediated task in exactly the same way. Technology augments us. It should not constrain or replace us.

I like to think that I am unaffected by the conforming impacts of technology, that I am a free actor in this equation. However, I cannot escape the cultural and organizational systems that have been shaped by technology. This ranges from annoyances of misshapen and poorly-thought out technologies to which I have to conform, to subtle shaping of cultures. I recently read an article that suggested that Gen Xers (my generation) were better suited to pandemic isolation because our formative technologies tended to be isolating. We spent weekends playing solo video games and making mix tapes instead of engaging in social activities so we’re used to being introverts. While I might quibble with the scholarly underpinnings of this piece, it does raise some interesting points about our cultural and, by extension, generational relationships with technology.

As a systems thinker I have always found the concept of cultural paradigms quite persuasive. We are pattern shapers by biological design. It’s part of what gave us an evolutionary edge. Those that could perceive patterns in the wild survived because they perceived threats and opportunities (aka, food) where others missed them. This extends to today under the guises of norms, etiquette, and other forms of socially-constructed “proper” behavior. If you offended the king your life could be snuffed out just as easily as by the tiger you overlooked in the brush. Unlike the tiger, however, the threat of the king represents a socially-constructed pattern.

Over the last 150 years the patterns we perceive have become increasingly mediated by technology of our own construction and this has, in turn, been layered over socially-constructed paradigms. At the same time, however, that technology has also subtly undermined those paradigms. Businessmen (and most were men) replaced kings and queens as the arbiters of society due to the technologies of industrial accumulation fueled by the technologies of steam, electricity, and the shop floor.

Digital technology has often been perceived as subverting those structures. However, the paradigm of the shop floor persists in many different ways. In a series of blogs I wrote for Bryan Alexander’s book club exploring Kim Stanley Robinson’s Ministry for the Future I looked at how paradigms of scarcity and acquisition have subverted the logic of technology, economics, our planetary ecology, and education. The conclusion: it’s not technology but rather the systems in which it resides that are responsible for most of our dysfunction.

I consider myself a constructivist. What that means is that I believe that most of the reality that we live in is socially constructed. We have gone from nature defining human patterns to humans defining human patterns. I think one of the reasons that I am this way is because of technology itself. I was an early computer user in my teenage years. As such I perceived how computers could be used to construct new realities (indeed, with early command line systems you were basically required to do so yourself). If you can reprogram digital paradigms, why can’t you reprogram human paradigms?

Over the years I learned a lot of hard lessons about how humans are a lot more wedded to their social paradigms than computers are to theirs. Digital tools can therefore be adapted to human paradigms much more readily than the reverse. For better or worse they are more frequently used to augment systems instead of augmenting humans. Technology can be used to augment climate change (such as through fracking and subterranean imaging). Alternatively, it can be used to combat climate change through data and tools that can be used to make renewable energy efficient or through imaging tools to help us perceive the scope of the problem. Which of those we choose depends largely on whether we maintain our technologically-shaped acquisitional paradigm.

What does all of this have to do with education and The Winter Games? I have found that with all paradigms we need to strip them down to their basic functions. In prehistoric times, if  your function was to hunt, then you constructed your paradigm accordingly and developed the necessary technologies to support that. Those who did this well developed a healthy symbiotic relationship with their technologies. Those who did not, perished. This has not changed.

We therefore have two challenges. First, we have to make a paradigmatic choice about the very nature of education. Is it a vehicle for producing industrial widgets measured by grades and certification or is it a vehicle for augmenting human capacity and, by extension, the societies (and paradigms) under which those humans operate? Once we have decided on a paradigm, it’s time to strip down to the basic tasks that support those paradigms. Only then can you match the appropriate technology to your needs. On January 6, we will hack this paradigm at the Winter Games during my hackathon “Learn at Your Own Risk.” (Spoiler alert: I’m thoroughly in the augmentation paradigm.)

It’s been 39 years since I entered the Digital Age with my Apple ][+. I have sought to understand why the rest of culture didn’t follow suit ever since. There are many evils that have resulted from the abuse of technology to support paradigms of inequity. Instead of becoming our partners, machines have instead been transformed into our overlords. When only the elite has the ability to symbiotically interact with the technological system vast swathes of human potential are wasted. In prehistoric times, technological and paradigmatic inefficiency was rewarded by extinction. It is hard to conceive of all of humanity meeting that same fate (aside from the odd Vogon bypass mishap) but it is possible. Education is our best opportunity to avoid this fate, but it will fail if we let our systems dictate our technological fates instead use technology to reshape those systems into more sustainable paradigms shaped by healthy and equitable technosymbioses. 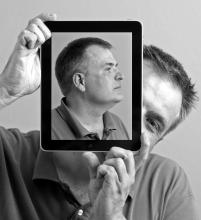