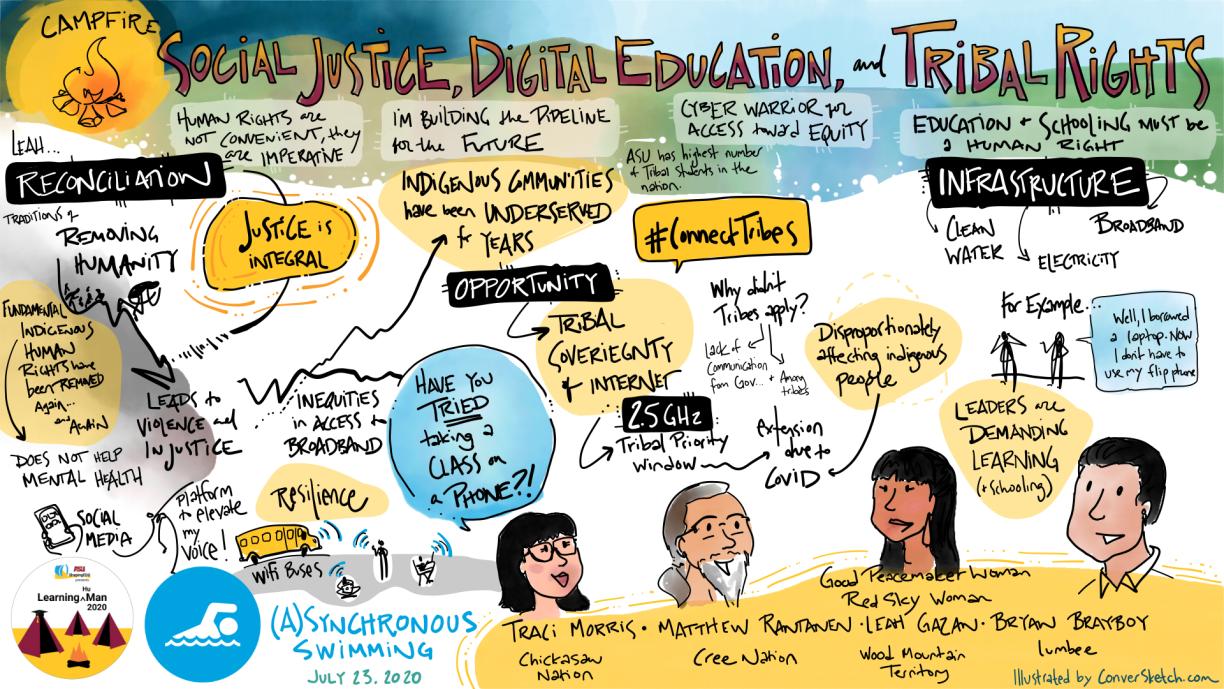 The rapid, forced transition from onsite to online learning environments in response to the spread of the coronavirus this year has put laser-like focus on an important challenge: the need for broadband access to the Internet and access to  the tools needed to use it effectively for work and learning. Without access and those tools, learners and learning facilitators are dead in the water.

The need for access, however, is far from a new issue/crusade for many working within our current “emergency remote learning” environments. Arlene Krebs, for example, is among those who has been advocating for broadband access for decades in her role as someone consulting in the arts, education, and technology. Someone who served as founder/director for The Wireless Education & Technology Center at California State University, Monterey Bay. Someone who has been involved in moving computers into the hands of learners through the Loaves, Fishes & Computers Project in Monterey County, in California and has been honored as a Broadband Champion by her peers. And now, someone who is a member of the organizing committee for ShapingEDU’s “Connecting for Work and Learning: Universal Broadband Access in the United States” initiative.

Access is an issue and a challenge that continues to evolve—as does our framework for describing and addressing it, as Krebs noted in an interview for this first in a series of stories from ShapingEDU on our newly-established blog. As she has repeatedly said recently, it is far more than a “digital divide”; it’s “a geographic, economic, racial, social justice, and digital divide”—one that needs to be effectively addressed in a variety of ways.

“I’ve been working in this arena all my life, with initiatives to assist the most underserved and underrepresented members of our nation...be it in education-teaching, in working with other pioneers in the field of distance learning to assure equitable access to learning resources, teachers/faculty, and participation, and when the Internet ‘kicked off’ in the late 1990s, to help expand opportunities for wired and wireless connectivity for Internet access.

“When everyone began to call it the ‘digital divide,’ it first meant—was understood as—access to technology and connectivity—be it DSL, satellite communications, or—as it evolved—'high-speed bandwidth.’ So at that point it became clearer, as I worked in this arena, that technology and bandwidth are part of the solution. Having the financial means to acquire technology and pay for Internet access was another part of the equation. So I began using the term ‘the economic and digital divide.’

“As I worked in this arena and helped to form the Central Coast Broadband Consortium, and organized annual regional conferences—'The Wireless Community & Mobile User Conference’—I became more aware, learned from others, that access is more than money and technology and connectivity. It became clearer that the telecom providers were not going to wire or provide connectivity in areas that did not produce an ROI, or where the geographic terrain is too difficult. These are referred to as underserved areas. So then it became a geographic, economic and digital divide. As the push for broadband evolved, as the FCC, cities, states, and our own California became more involved in policy and public awareness, I realized that the divide is a geographic, economic, racial, social justice, and digital divide. Today, not having access to the tools, the connectivity, the resources to participate fully in our increasingly digital and virtual culture, is a form of exclusion. It is a ‘locked-out’ form of denying equitable participation in our democracy.”

The ShapingEDU's “Connecting for Work and Learning” initiative, organized by a community of education changemakers seeking to catalyze change in response to this urgent challenge through action-oriented resources, community engagement and stakeholder inclusion and partnership, is designed to create a coalition of current stakeholders interesting in working to support universal broadband access throughout the United States. Coalition members, continually reaching out to potential partners, is currently working to take the following steps:

“Over the past few weeks, there have been numerous articles in our local press and nationally about this persistent challenge of providing the tools and the connectivity to those without access,” Krebs notes. “It is especially potent now where ‘remote learning’ is at the forefront of the national discussion. How over 700,000 students in California alone do not have adequate tools or connectivity, how in our Monterey County 17,000 students of 78,000 K-12 students, do not have access. So it is a two-fold dilemma. The first is the economic, geographic, racial, social justice and digital divide; the other side of the coin, so to speak, is access to education (as well as access to health, social services, government & employment resources) on the Internet. As for distance learning, as I mentioned, I’ve been involved in this since the early 1980s with the first nationwide educational satellite networks, to two-way interactive videoconferencing to today’s online arena, and am a founding member of the United States Distance Learning Association, a nonprofit organization that brings together the business, government and education (K-12, higher ed, lifelong learning) arenas.

“I used to travel this country teaching about distance learning, the professional development that’s required for K-12 teachers and higher ed, the tools that are necessary, the time and money commitments, the assessing of the skills that a learner/student needs to bring to the table, so to speak, to participate fully and effectively. What we have now is a ‘hodge-podge’ emergency-laden response, so I am glad and grateful these issues are at the forefront, but concurrently distressed that we have 1) not solved the technology and broadband infrastructure issues and 2) that distance learning potentials are being met in a haphazard, uncoordinated manner that is leaving many students at the wayside—either turned off to what their teachers are so desperately and heroically trying to provide without proper professional development and the use of readily available curricula and distance ed resources—or students who are excluded because of no technology or access.

“Yes, the issues are glaringly at the forefront right now. However, with the uncertainties festered by the global pandemic and the global economic downturn, I fear that broadband and technology access may be pushed aside once again for those who are not empowered. Broadband will continue to be provided for those in urban areas and for the workers of global and national corporations/agencies—but not for those who need it, too.”

For those interested in working to positively address the challenge, Krebs offers a variety of suggestions:

For more information about the Connecting for Work and Learning initiative or to become involved, please visit the project page on the ShapingEDU website or contact organizing committee members.

N.B. -- A lightly-edited version of the full transcript for this interview is available on Paul's Building Creative Bridges blog.