“Broadband access in Indian Country is not just a product of it often being rural and remote,” H. Rose Trostle (they/them/theirs), Research Professional at the American Indian Policy Institute at Arizona State University, observed recently during an interview for the ShapingEDU Reshaping Learning blog. “Broadband infrastructure often relies on access to other forms of infrastructure, such as electric lines or cell towers.

“The short-term problem is determining what kind of technology makes sense for each community because Indian Country is not a monolithic whole [574 federally-recognized tribes with more than 60 state-recognized tribes in the U.S.],” they continued. “The challenges that are faced in Alaska are very different than the challenges faced in southern California. We need policies and programs that can respond to this diversity. The long-term challenge is infrastructure development generally in Indian Country, from the mapping and development of improved road infrastructure to the further expansion of water lines. We need to consider broadband infrastructure as just one piece of the puzzle and ensure that communities have the planning capacity to determine what works best.”

“I grew up in a rural community without great access to the Internet, but it was functional. I learned Latin via list-serv and early videoconferencing programs. I got more involved in advocacy around Internet access when I started my first job out of college as an intern at the Institute for Local Self-Reliance. That organization focuses on municipal and community networks,” they recall.

“When I was in high school, I took some online courses and would routinely experience Internet connection problems. In at least one case, this was caused by my neighbor down the road cutting through the DSL line. It was a rural area, and the infrastructure was not necessarily well-marked. The Internet connection was also not always functional enough to do video conferencing that was required. It made learning very difficult. Because of this, I have been very focused on expanding broadband access (high-speed Internet access) in rural and Tribal communities.”

As for the neighbor who inadvertently cut that connection: “My parents had a conversation with the neighbor, who was apologetic, but it did not bring us closer. He had been performing work in the right of way, which was not permitted at the time. He also did not necessarily understand the importance of having an Internet connection.” 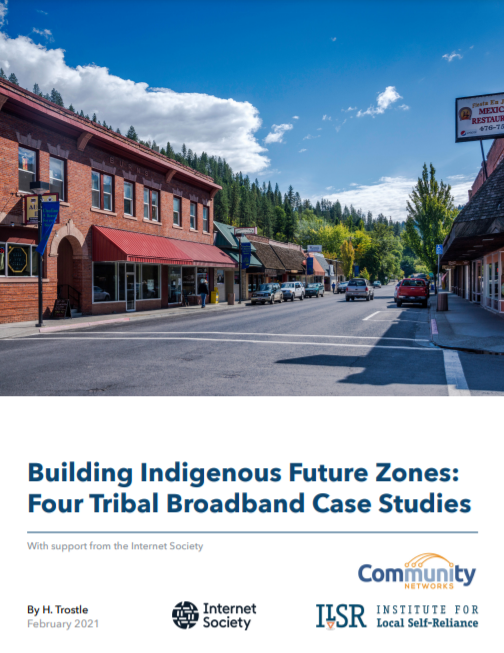 Improving access to capital: “Native Nations have had to be creative when looking for funding.”

Avoiding single-purpose funding: Federal funding “is often limited to a single purpose, such as connecting Indian Health Services facilities or schools & libraries…The Schools, Health, & Libraries Broadband Coalition encourages a concept called ‘To and Through Anchors’ to get past these silos.”

Recognizing the Preparation Needed to Take Advantage of Opportunities: “Native Nations that have already started projects or have plans to start projects can easily jump on new funding opportunities.”

Assuring that communities benefit from new job opportunities that accompany broadband-access projects: “Training and hiring locally is a benefit to the community, and this means that contracted workers do not have to travel far to work on a project.”

“Within each of these communities, there are people who took up the challenge and saw opportunity there,” Trostle observes. “They did not just focus on what they did not have, but on what they could do with better broadband access. This enabled them to write grants to show proof-of-concept projects, and they leveraged these initial successes to get larger funding opportunities. They also worked with the community to determine what the community needed and wanted. It was not about improving Internet access for the sake of improving infrastructure metrics, but about what community members wanted to do with better connectivity. The IT [Information Technology] and Planning professionals whom I interviewed really highlighted the importance of understanding the community strengths and how they could get to better Internet service with these strengths. They also were realistic about their financial plans, which meant they could develop networks that made sense for their communities.

“[A] story that comes to mind is from my conversation with Jason Hollinday at the Fond du Lac Band’s Planning Division. They spent years at Fond du Lac trying to develop a broadband plan, and they kept being turned down for grant funding. These slow starts, however, made them recognize the importance of describing what the community actually wanted from a broadband network. The planning division got more feedback from the community members and realized that they needed to dream bigger for their network. The wireless network that they had initially proposed would not work for the whole community because of the terrain and the capacity limits. They needed a fiber network, and by learning from all their failed starts, they were able to write a successful grant to secure funding for a fiber network.

“Something that is very important that we haven’t fully touched on here: Broadband access in Indian Country is getting better,” Trostle suggests. “We do not have great data available, but it has improved over the years. And one of the reasons for that is Native Nations building their own networks or collaborating with other local governments or local cooperatives to build this infrastructure. This is an exciting time with the recent allocation of the 2.5GHz Spectrum to Native Nations. There is more opportunity than ever for  improved broadband access in Indian Country. We are all learning and building together.”

To talk with Trostle is to become increasingly aware of the importance of engagement and empathy in any discussion about broadband access. To talk about “broadband access” is to carry on a conversation that lacks emotional impact. To talk about “the ways that people can use this to enhance what they do in their daily lives” moves it into the realm of storytelling for engagement and inspiration—which Trostle does with laser-sharp focus.

“In my work, I center the voices of the people that I interview and their perspectives on what matters to their communities,” they admit. “These stories form the foundation of the work that I do when I dive into data analysis or mapping. I focus on stories of solutions rather than of deficit. There are many stories about how Native Nations have built their own broadband infrastructure or improved cell service in their communities. But we often do not hear about them because they are local projects that the national media does not pick up on. When I do my work, I try to ask not just about the problems, but on what people have already tried or accomplished to change the situation, to change the narrative. Indian Country has a lot of stories of resilience and creativity, and broadband access is one of them.”

Reflecting on the work of broadband advocates they admire, Trostle says “I have been really impressed with the work of Matthew Rantanen from Tribal Digital Village. He is always willing to speak with Federal and Tribal government officials on Tribal broadband. He is quite an advocate for broadband and seems to always be at the forefront of broadband advocacy groups. I’ve had the opportunity to talk to him a few times, and I have always come away with more ideas and more motivation to do the work that needs to be done. He is sometimes called the Cyber Warrior.”

For broadband advocates looking for guidance, Trostle suggests talking to government officials, neighbors, and visitors to your community.

“Find out what your community values in an Internet  connection,” they say. “Get involved with local advocacy groups for digital inclusion to distribute devices or offer digital skills trainings. Learn more about different types of devices and different types of broadband technologies. Encourage your local officials to work with other communities nearby.

“It is important to keep an eye on funding opportunities and to make sure that smaller communities are not left out of broadband expansion plans. Keep an eye out for state funding opportunities as well. Keep track of what’s happening at the FCC. Remember that your local officials know your story, but that national organizations often do not. Share your ideas and your thoughts because they are valuable.”

N.B.: The original lightly-edited transcript of the interview providing material for this article is posted on Paul's Building Creative Bridges blog.