The whole world seemed to be shutting down in May 2020. The spread of the coronavirus during the first months of the year, combined with efforts to avoid face-to-face contact as much as possible, had pushed many of us even further online than we already had (willingly) gone—including in the field of teaching-training-learning. Within the ShapingEDU community, we were doing our best to respond positively to the challenges produced by the pandemic, and some of us were even beginning to discuss what we, as a community of dreamers, doers, and drivers shaping the future of learning in the digital age, could do that would be positive and actionable.

Near the end of the monthly meeting of community leaders that month, we were identifying some of the challenges—those wicked problems that, by definition, seem to evolve so quickly that any proposed solution fails to deal with the problem by the time we are able to get around to implementing that solution—and turned our attention to the terrible problems learners (and educators) were facing because they had inadequate—or no—Internet access in an environment where learning had gone online.

For some of us, Internet access and, more specifically, broadband access had long been an issue of great concern—and one that never seemed to gain traction. And we know that some countries—including Switzerland, Finland, Spain, the United Kingdom, and Botswana—provide universal broadband service. But with learners (and employees) all over the United States making their way into numerous media reports as they parked outside libraries, or retail businesses to gain the Internet access they didn’t have at home, the topic was suddenly hot. Very hot. Which made a few of us in ShapingEDU wonder aloud, during that brief conversation, whether “the right to bear Internet” was finally something that was becoming significant enough to actually be able to attract long-term support and, more importantly, inspire the collaborations necessary to produce something as ambitiously dreamy as universal broadband access throughout the United States. 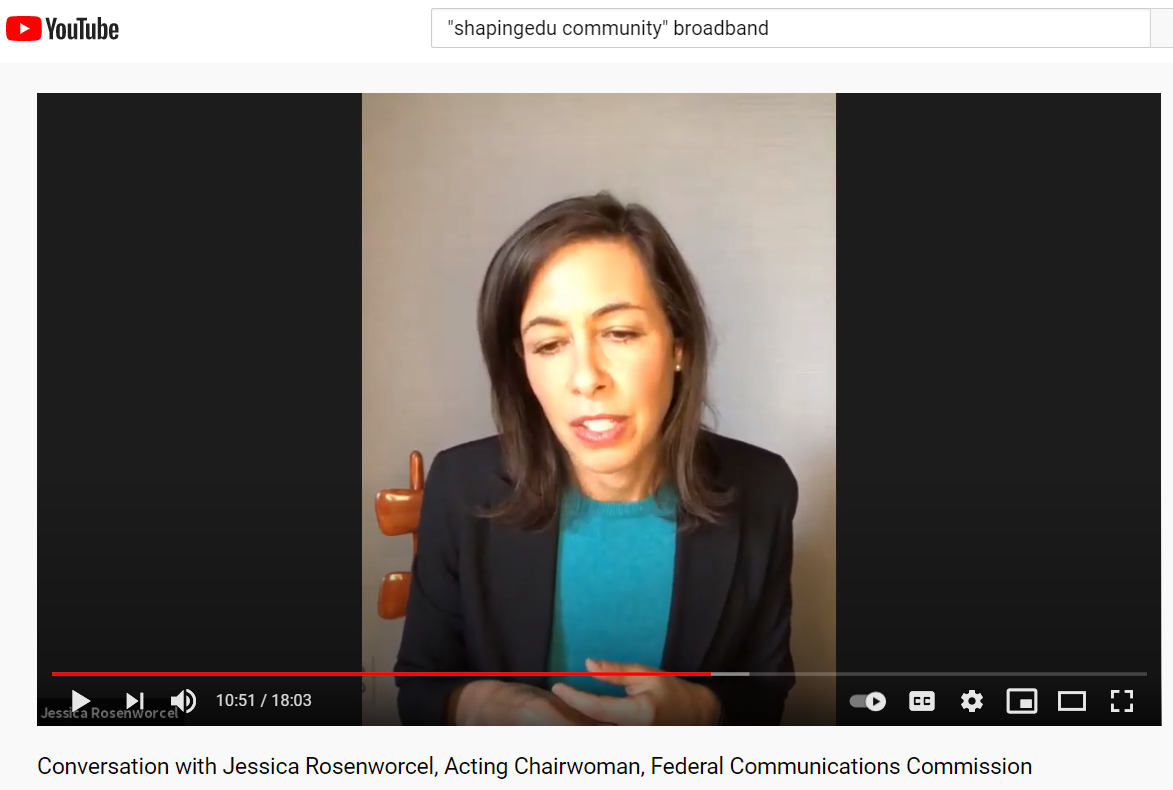 With a combination of trepidation—Really? You want us to tackle something else even though we’re struggling to complete what we have already undertaken?—and an equal amount of hope that this was a quest worth pursuing, we agreed to see whether this particular group of dreamer-doer-drivers could find a significant role to play and, in the process, make meaningful contributions in the pursuit of universal broadband access.

The results have been—in what is admittedly the first year of what is likely to be a multi-year effort—encouraging both in terms of what we set out to do and in terms of the contributions the project has made to the way the ShapingEDU community undertakes projects (e.g., weekly rather than monthly meetings for projects, an ever-growing organizing committee that draws new people into the community, more directly working as advocates than we previously had worked within this particular community, connecting our work, through participation in online conferences, to the work done in other communities, and connecting our efforts to other projects and initiatives within the overall ShapingEDU community).

In terms of contributing to support for step-by-step implementation of universal broadband access, the “Connecting for Work and Learning: Universal Broadband Access in the U.S.” group set out not to start from scratch but, rather, to see if from its strength as a global community of educators, trainers, writers, storytellers, and consultants, it could bring together various players to combine efforts as broadband advocates. We hoped we would attract members of our community to be part of the weekly action-oriented meetings we were scheduling; we had no idea, in May 2020, that among those who would be attracted to some of those meetings would be Acting FCC Chair Jessica Rosenworcel (March 2, 2021), FCC Chief of the Consumer Affairs and Outreach Division Lyle Ishida (May 4, 2021), broadband-access advocates Mark Goldstein and Steve Peters (May 11, 2021), and many others who have become regular participants in the conversations. Nor did we expect to produce online events that remain available as learning and advocacy resources through the ShapingEDU community YouTube channel.

We also did not, in May 2020, realize that among the educational and advocacy efforts we could make would be an ongoing series of interviews with longtime broadband advocates whose stories document the challenges and offer inspiration to others interested in finding ways to join the fight for universal broadband access: advocates including “Broadband Champion” Arlene Krebs, rural librarian Dianne Connery, Arizona State University Chief Information Office Lev Gonick, CoSN (Consortium for School Networking) Digital Equity Advisor Beth Holland, and “Broadband Avenger” Gina Millsap.

And we certainly had no idea that our own continuing efforts to collect and share broadband-access stories would so strongly dovetail with FCC Acting Chair Rosenworcel’s own desire to collect stories—a realization that has sped up our own process of collecting stories to be submitted to the FCC’s site which was recently created as a repository for stories that can be used in broadband-advocacy efforts. Or that we would be creating a free four-part course for those wanting to develop their skills as broadband advocates. Or that we would, under the guidance of a community member, be engaged in an effort to identify broadband opportunities in the American Jobs Plan. Or that we would be participating, as panelists, in virtual conference presentations and a LinkedIn Learning session for those interested in fostering universal broadband access.

Yes, it has been a very busy year. And we’re all looking forward to carrying on this work with as many partners as we can attract. If that seems like an open invitation to you, please feel free to accept it by completing this simple form to join the organizing team and participate in our weekly (one-hour) online meetings (generally on Tuesdays, from 4-5 pm ET/1-2 pm PT) whenever you are available. And tell your friends and colleagues that the invitation is open to them, too.